Bangladesh ought to make major readjustments to its economic growth model and policies to sustain high growth, says a study, as innovations of the 1990s are a spent driving force these days. 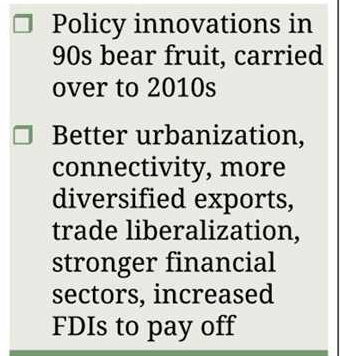 "Digital development and addressing climate-change issues will also accelerate the growth process," the duo says in the study paper, elaborating on the ways forward in the country's development pursuit.

The paper, titled 'Adjusting Bangladesh's Growth Model to Sustain Progress', was presented in a session on 'Growth, Employment and Poverty' at the annual development conference organized by the Bangladesh Institute of Development Studies (BIDS).

Dr Zahid Hussain predicted the growth to go on a downturn after 2030 mainly due to capital deepening and slower population growth.

He said strong reforms to strengthen total factory-productivity growth, female workforce participation and investment can accelerate growth, if done together.

But the known-unknown part of the country's growth happened during 2015 to 2019 where residual effects along with persistence led Bangladesh's growth.

"However, persistence subsequently fades away if fundamental of policy not gets stronger by reforms," he stated in the country-case study.

Nora Dihel sees the upcoming LDC graduation as challenging for Bangladesh due to low diversification, lack of trade liberalization and limited competitiveness.

Bangladesh is trading less than other countries at comparable development level and exports are also four times concentrated than other developing countries.

Protective trade regime is one of the key reasons of less diversification of exports, she said.

She suggested that modernization of tariff regime can support Bangladesh's export diversification, LDC graduation and dealing with anti-export bias.

"But adjusting the tariff structure to peer country levels may result in high loss of revenue," she said, adding that revenue offsets of tariffs might make the impact more manageable.

Chairing the session, Executive Chairman of Power and Participation Research Centre (PPRC) Dr Hossain Zillur Rahman pointed out two major turning-point decades in the growth trends of the country. "The 90's were the period of growth acceleration and 2010 decade was a decade where competitiveness was on decline and high inequality was on the rise," he said.

"We need to get to the root of this political economy to get the idea of how the country should go ahead in the future," the economist, also a former caretaker government adviser, said about the growth-triggering changes.

He said people's adaptive strategies also need to be included in the policy decisions reforms.

Half of GDP remains exempt from VAT