Bangladesh's economy could be affected substantially after graduating to a developing nation in 2026 as it is not ready, mainly on trade front, to weather the impacts.

Economists and trade experts made these observations and reactions on Saturday.

Early Saturday, the United Nations Committee for Development Policy categorised Bangladesh as a non-LDC country for maintaining all three criteria both in the first (in 2018) and the second (in 2021) reviews.

Bangladesh along with Nepal and Lao PDR will graduate from its LDC (least-developed country) status to a developing one in 2026. 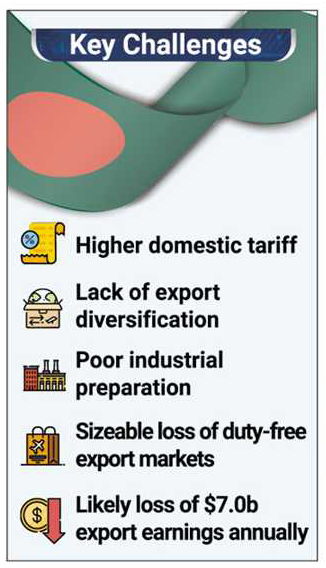 Policy Research Institute of Bangladesh (PRI) executive director Dr Ahsan H Mansur said although Bangladesh's economy was comparatively on a solid stance, its industrial sector was is in a very poor state.

"From the trade front, our industries and businesses are completely unprepared to sustain in the post-LDC era. Although we've been talking about the challenges since 2017, the government and industries have not taken any preparation yet."

Bangladesh had not any better talks with the EU, ASEAN or other counterpart international trade partners over the past four to five years while working for its graduation, he said.

"You see, Bangladesh's average tariff rate is nearly 27 per cent. But in ASEAN countries, it's only 4.7 per cent," Dr Mansur told the FE.

"So, if Bangladesh goes for bilateral talks with the East Asian nations, will they feel free for talks with this higher protected economy? I have enough doubt."

The senior economist suggested taking preparation from day one on multi-fronts to face the upcoming challenges after 2026.

"The loss of exports can be sizeable in the markets where Bangladesh enjoys duty-free access as an LDC," he cited.

"It's also important to mention that many of the prospective benefits of LDC graduation are not automatic as the country has to work quite a lot to materialise those benefits."

In contrast, Dr Raihan said, almost all possible losses would be automatic soon after Bangladesh graduates… Therefore, it has to prepare over the next five years to counter these challenges.

Expressing his delight, the economist said Bangladesh had to make some extraordinary efforts in its economic and social development process in the days to come.

Benefits of LDC graduation were cited to include an improved country image and higher rating for investment by international rating agencies which may attract larger FDI, said Dr Raihan, also executive director of the South Asian Network on Economic Modeling.

According to the latest Perspective Plan 2021-2041, Bangladesh is likely to lose $7.0 billion's worth of export earnings annually after its graduation to a developing nation.

It might also be deprived of the concessional loan benefit from multilateral and bilateral development partners after its graduation.

Based on the simulation results from the global dynamic general equilibrium model, the plan said: "The loss of preferences in the markets of the EU, Canada, Australia, Japan, India and China in 2024 might lead to an annual reduction in the total export of Bangladesh by 11 per cent or equivalent to around $7.0 billion given the current projection of export growth."

"Although the graduation as non-LDC would improve the country's image and rating for attracting foreign direct investment, there will be a number of risk factors."

As an LDC, Bangladesh along with its 48 peers currently enjoys duty- and quota-free benefits under the EU's generalised system of preferences (GSP).

Bangladesh Garment Manufacturers and Exporters Association president Dr Rubana Huq said, "Graduation brings an immense national pride for us, it would also fetch them a number of challenges."

Bangladesh's export competitiveness would also be affected since the current subsidy programmes of the governments might not continue in the post-LDC era in its current fashion, she added.

"Lack of diversification within and beyond RMG is also a drawback for Bangladesh's strategic growth plan, particularly in a situation where the lion's share earner, RMG industry, relies heavily on market access."

"Lack of backward linkage capacity, particularly in the woven textile sector and non-cotton segments of textile and clothing is a major handicap for the industry," she went on to say.

"Access to technologies, innovation and capital would be critical to facilitate excellence in the industry to create opportunities through product diversification and moving up the ladder of value chain."

Bangladesh would need similar empathetic consideration from the EU in particular to extend the existing scheme, say EBA, for Bangladesh for at least another seven to 10 years "on the ground of our high concentration on RMG and in EU market, and the possible implication on employment and poverty".

Dr Huq said, "Discussion with the European Commission needs to be initiated with regard to 7.4-per cent import threshold criteria for GSP Plus scheme."

"The EU is currently reviewing its GSP scheme for 2023 which will be finalised soon. If we can successfully lobby with EU to re-fix its threshold criteria from 'import under EU GSP' to 'EU's overall import', this may resolve the problem."

Simultaneously, Bangladesh needs to engage in bilateral FTA discussions with the EU and other prospective and significant trade partners, she suggested.

Dr Huq said a mapping of the policy ecosystem (like investment, subsidy and exchange rate management) is essential for a sustainable graduation by a strategic approach to accomplish 'synergic benefit'.

Stakeholders for economic recovery guideline in budget for FY22

Banks asked to charge accounts maintenance fee once a year