November 12 in 1970: Day of devastating cyclone

BHOLA: November 12 is a day that people of Bhola try to forget. On this day in 1970, a powerful cyclone took away the lives of at least 150,000 people while thousands went missing.

Although 52 years have passed since then, natural disasters haven't stopped from hitting the island district. The lives of people from Bhola continue to be in great danger as the island lacks adequate cyclone shelters.

Matlab Munshi, an eyewitness to the devastating cyclone, described how the impact of that brutal cyclone was.

"It was raining mildly with stormy wind since that morning. The storm started to turn into a cyclone in the evening and hit the island at night. We didn't receive any forecast about the cyclone as communication system was weak at that time," said Munshi.

Munshi added that the cyclone had hit a total of 18 coastal districts of the country including Bhola during the pre-independence era.

"During the cyclone, 8-10 feet tidal surge from the rivers and the Bay of Bengal submerged everything. When the storm subsided and we went out the next morning, we saw corpses dangling in tree branches and lying scattered everywhere. Many people never found their loved ones again as their bodies were washed away. What's more painful is that we had to remain without food for 10 days straight, which exacerbated our sufferings," Munshi added.

Kalu Majhi (75) is a resident of Shibpur union under Bhola's Sadar upazila who had lost 30 people, including seven from his immediate family, to the Cyclone of '70. While talking to the news atgency, Kalu described how his family members went missing on that night.

"Both my house and my family members were washed away. I along with a brother of mine survived by holding onto a tree. In the morning, I saw dead bodies littering everywhere. After going to the place where my house used to be, I came to learn that all of my family members were taken away by the storm. The situation was so tragic that we had to dig big holes and bury 90-100 bodies together," Kalu said.

People living in other parts of the country and the world came to know about the impact of the cyclone when photos of the disaster were published in Daily Purbodesh newspaper four days later. 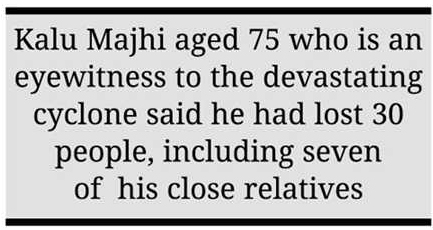 "After taking the photos of the corpses strewn across the island, I sent them to the newspaper's office in Dhaka by fishing trawlers. Besides, I sent the news using the wireless system of police. The photo story was published under the heading 'Cry Bangalees Cry: Corpses Are Dangling in Trees in Bhola'," said M Habibur Rahman, a journalist of the newspaper at the time and currently the President of Bhola Press Club.

Fifty-two years have passed since then, but people of Bhola still have to fight with natural disasters on a regular basis. Their lives are still endangered due to a dearth of cyclone shelters in the various chars of the island district.

Kabir Patwari, a resident of Char Patila under Bhola's Charfashon upazila, said as their Char is separated from the main island, it becomes tough for them to go to cyclone shelters during cyclones.

"There are a total of 746 cyclone shelters in Bhola, which are inadequate to accommodate all the needy people of the district. That's why we need more shelters here," said Md Abdur Rashid, deputy director of Bhola's Cyclone Preparedness Program (CPP).

During his visit to Bhola's Monpura island after cyclone Sitrang, State Minister for Disaster Management and Relief Dr Enamur Rahman had said the government has taken up a project to build 1,000 cyclone shelters in the coastal districts of the country.

"As of yet, we've built a total of 220 new cyclone centres, while construction works of 423 more centers are currently going on," Enamur said.

Driver flees after death of woman he ran over in Bhola

One held with 20kg venison from Sundarbans

2 killed over land dispute in Dinajpur