Potatoes being bought, sold from field in Joypurhat

CHANDPUR: Though the potato farmers in the district are expecting a bumper yield of potato this year, they are afraid of getting it's real price in the haats and bazaars in near future.

They think that they are unlikely to get the fair price of their hard- earned produce. Just after a few days, they are expecting to harvest the potatoes in their fields. Many are already seen harvesting potatoes from their fields in Chandpur Sadar, Kochua, Matlab Dakhshin, Matlab Uttar and four other Upazilas.

This year, with keen interest and good expectation, the potato farmers have cultivated potatoes in the hope of getting high price. Last year, they also got good profit out of selling potatoes. As the potato price was high at Tk 50.00 a few months ago during Corona pandemic, they showed keen interest in potato cultivation this year. Now- a- days, potato is so cheap in the haats and bazars. It sells at Tk 18 or Tk 17.00 per kg in the town's and its outskirts' kitchen markets.

But in the rural markets, the price is 16.00 or 15.00 per kg. In the potato fields, potato sells at Tk 12.00 per kg, said a good number of farmers adding that that's why, they have decided to store their potatoes in the cold storage so that when the potato price goes up, in the near future, then they will sell their potatoes at high rate. 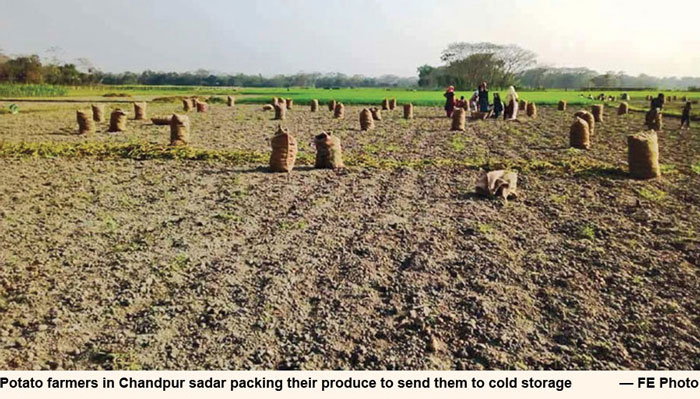 While talking to this correspondent in the fields, Rajon Dhar of Sengaon, Abul Bashar Khan of Kumardughi , Khokan Gazi of the same village and Faruque Bepari of Krishnapur village and many other potato growers in Chandpur Sadar have told about this decision to this correspondent on Wednesday afternoon. They have said that middle men want to buy potato in the field at Tk 480 per maund which is very low and so they are simply disheartened.

While in Chandpur Sadar , Jinnah of Damodordi village, Masum Billah of Bishnupur village, Fazlur Rahman, Razzak Bhuiyan and Hannan Gazi and Jahangir Gazi of Kalibhangti area and some other farmers have said that they are happy with bumper yield of potato. They are thinking of harvesting potato within a few weeks. But they all fear 'the down price of potato'. In this case, they have told this correspondent that they will keep their produce in Cold Storage at Baburhat Apollo Cold Storage and sell them later when the price will be up.

According to Chandpur Agri Extension office, this year, a target was fixed to bring a total of 8 thousand hectares of crop land under potato cultivation in the eight Upazilas of the district.

The target of yield was fixed at 0.17 million (one lakh 76 thousand) metric tonnes of potato.

Talking to this correspondent, Chandpur Agri Extension Office's Deputy Director Krishibid Mohammad Jalaluddin has said, 'Due to favourable weather condition, long time stay of moderate/ tolerable winter, no cold waves, less disease and no pest attack, and proper advice and guidance to the farmers by the field level agri officials, the potato yield per hectare is quite satisfactory this year in the district'.

The same view was ventilated by the potato farmers in other areas in Chandpur Sadar, Matlab Dakhshin, Matlab Uttar ,Kochua and other Upazilas.

Shahidullah Bhuiyan of Buthunda village has told this correspondent that he had cultivated potato on one acre 20 decimal of lands. Last year, he got good price. In the hope of better profit, this year, he has cultivated potatoes on more 10 bighas of land. The other farmers also told the same thing. Now in case of low price, they will store the potatoes in the local Cold Storage.

Contacted, Kochua Upazila Krishi Officer Sofayel Hossain has told this correspondent that this year he also expects a bumper yield of potato in Kochua. Not only that, this year, the farmers will harvest home potatoes just after a few days. Most farmers have already started harvesting.

When contacted, the same view was ventilated by a few farmers- Saiful Islam of Ashwinpur village, Shafiqul Islam(50) of Paton village and Majibur Rahman(55) of Masunda village -all Nayergaon union under Matlab Dakhsin Upazila .

Chandpur Agri Extension Officials Naresh Chandra Das and Abdul Mannan Mia have told this correspondent, 'If the potato price shows downward trend, the farmers may preserve them in Cold Storage for better price and profit in future. So there is no worry for them'.

Our Roving Correspondent from Joypurhat reports: With the harvesting of potatoes across all five upazilas of Joypurhat district the vegetable has been being bought and sold from the fields.

Potato harvesting began from the last week of February in a full swing and it will be continued up to next week. The farmers as well as wholesalers are passing busy time to process the crops round the clock in the region.

Besides potatoes are now being bought and sold on the village roads. Farmers are quite happy with the current market price of potatoes. Due to the high fertility of the crop lands of this district, potato is cultivated in a large scale.

According the Department of Agricultural Extension (DAE) the target for this year's Rabi season production was set at 6,10,500 metric tonnes of different varieties of potatoes on 47,500 hectares of land in all five upazilas.

The work of picking potatoes from the field is going on in full swing with the male and female day labourers. The wage of a labourer is Tk 300 to 400 per day. The farmers are to pay Tk 4000 to 5000 for harvesting from a bogha of land.

Meanwhile, potato wholesalers are going to different villages instead of the market and buying potatoes from beside the roads. Farmers are also able to sell potatoes conveniently from the village. The current wholesale market price of potato is Tk 500 to 600 per maund while Tk 10 to 12 per KG in the rattail markets.

On a visit on Saturday the correspondent found Diamond, Cardinal, Asterix, Telpakri and Fata Pakri varieties of potato were cultivated in a large scale while local variety in a small scale. The farmers are getting good yield and fair price after harvesting from the field.

Shahadat Hossain, a farmer from Diyol village of Akkelpur upazila, cultivated potatoes on 10 bighas of land costing Tk 0.1 million hoping for Tk 0.2 million as profit this current season. He got over 1200 maunds of fresh potato yield, he added.

Sudeb Kunda, a farmer from Pachbibi upazila, has cultivated potatoes on 3 bighas of land spending Tk 30 thousand and sold them at Tk 90 thousand. Farmers are considering potato cultivation as a profitable cultivation.

Deputy Director of DAE SM Meftahul Bari said due to favourable weather condition and timely supply of necessary agri-input, bumper production of potatoes has been achieved in all five upazilas this time

Four members of a family die after electrocution