Bangladesh steps into a new era of development as a communications mega-infrastructure, the Padma Multipurpose Bridge, becomes a reality undeterred by multiple headwinds.

The defining moment was ushered in when a visibly jubilant Prime Minister Sheikh Hasina opened the longest bridge in the country, and a unique one in the world, through paying toll herself for the maiden drive across it at 11.48 am amid countrywide festivities and celebrations.

With this, a long-cherished dream of some 30 million people of 21 districts in the southwestern part of the country came true. The bridge will be opened to public traffic this (Sunday) morning, ending ages of agonies and frequent tragedies associated with crossing the world's second-most turbulent river by ferries. 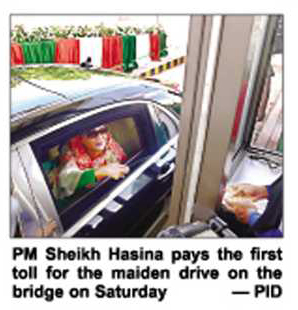 The inauguration of the 6.15-km bridge, which connects the southwestern part of the country with the capital through Munshiganj, Shariatpur and Madaripur, ends seven-year-long herculean task carried out by a 5000-strong workforce with the spending of 3.1 billion US dollars.

"The bridge is not merely a structure of steel, cement and concrete--it is a symbol of the country's capability, pride and dignity. The 42 spans of the bridge are the reflections of an audacious Bangladesh," an emotion-choked Hasina told the citizen gathering held at the Mawa end of the bridge prior to heading towards her dream bridge.

The Prime Minister has already been acclaimed at home and abroad for her 'bold and courageous' decision to implement the project with domestic funds despite opposition from many.

After opening a mural titled 'father and daughter', portraying the faces of her father Bangabandhu Sheikh Mujibur Rahman and herself, the Prime Minister started crossing the bridge in a motorcade at 12:07 pm.

Flanked by her daughter Saima Wazed Putul, Sheikh Hasina took a 15-minute break in the middle of the bridge to enjoy a spectacular flypast conducted by a fleet of 31 jets and helicopters of Bangladesh Air Force.

Top rung of her government and party, and chiefs of army, navy and air force also joined her in the on- bridge ceremony. Ministers, State Ministers, Deputy Ministers, Members of Parliament, diplomats, secretaries and political leaders followed her on 13 buses.

She reached the Jajira point of the bridge at 12.34 pm and then joined a huge joy rally organised by her party.

Earlier, addressing the inaugural function at Mawa point, the Prime Minister said that the bridge signifies the emotion, resilience, endurance and creativity of Bangladesh.

Hasina said the bridge project was completed through demolishing a web of ''conspiracies''.

"It is a symbol of our pride and self-esteem.. our emotion, courage and vision that we will do the Padma Bridge and will certainly be able to do," she told the gathering of the dignitaries comprising top officials of the government, party and diplomats and other professionals.

She said the bridge again proved Bangabandhu's words that 'no one can suppress' the Bengalis as they made the bridge building happen.

Narrating the background ballad of the biggest infrastructure project of the country, the prime minister said that her government did not back out from its implementation when the World Bank withdrew its funding for the project.

She said that it was the strength of the people of her country from where she got the encouragement to implement the project with own funding.

The Prime Minister thanked the local people who sacrificed their land and ancestral homes for the project.

Referring to the 'conspirators' she said that she has no complaint against them. ''Let good sense prevail upon them and I hope they will be responsible to the wellbeing of the people.''

She mentioned that due to the false allegations and accusations of corruption by the World Bank her family members and senior officials faced embarrassment and top officials related to the project faced humiliation.

"A person who was a Managing Director of a bank was asked to quit as his age did not permit him to hold the post," she told her audience.

"He was offered the post of Adviser Emeritus but he felt offended and then the World Bank withdrew the funding," Hasina said in an oblique reference to the then Grameen Bank Managing Director, Dr Yunus.

The Prime Minister noted that the highest standard was maintained in constructing the bridge and no compromise was made in maintaining the quality.

An emotion-choked Sheikh Hasina said that she could not have completed the mammoth task sans blessings of her father Bangabandhu Sheikh Mujibur Rahman and mother Begum Fazilatunnesa Mujib.

"I always feel the hands of their blessings on my head,'' she added.

The Prime Minister said though it was estimated that the Padma Bridge would contribute 1.2 per cent to the GDP growth of the country, she felt that it would be much higher.

She mentioned that her government has been able to keep the growth momentum on track braving the onslaught of corona pandemic and the Ukraine war.

The Prime Minister also talked about her government's various ongoing infrastructure projects and visions and said the goal to be developed country by 2041 is achievable as well as SDG goals.

After her speech she released a commemorative postage stamp and a 100-taa banknote.

Earlier, a theme song and a presentation on the Padma Bridge were presented during the function. China Major Bridge Engineering Company, the contractor of the main bridge, handed over a Padma Bridge replica to the Prime Minister.

Mr Quader, who is also general secretary of the ruling Awami League, said that by constructing the Padma Bridge, the government gave a fit reply to those who conspired against the project. He said the Padma Bridge is the symbol that tells Bengalis can do everything.

Anwarul Islam lauded the project officials, including Project Director M Shafiqul Islam, for their sincerity and devotion in implementing the bridge project and said all of all sectors responded to the project's implementation positively.

Around 10,000 people have worked on the project sites on various occasions to build the main bridge, do river-training work, construct approach roads on both sides, and for resettlement-site development. Some 120 engineers and staff of the PMB project have been engaged since the beginning.

Besides, some 3,000 consultants from national and international levels, including a 10-member of Panel of Experts, supported the megaproject at various levels. People from 14 different countries also worked in making the highly challenging project a success.

However, the project has passed through challenges after the first funding arrangement under the leadership of the World Bank was withdrawn in 2012.

The then bridge secretary, Mosharraf Hossain Bhuiyan, and project's senior engineer Quazi Ferdous were sent to jail for several months to satisfy the WB which demanded resignation of the then Communications Minister, Syed Abul Hossain, raising allegations against him of possible corruption in the selection of Construction Supervision Consultant in September 2011.

The WB Country Director told the media that the bank as a close development partner of the government is happy with the achievement of the Padma Bridge. Ms Mercy, who wore sari on the occasion, hope that a ''long-term benefit will be enjoyed by the country due to the construction of the Padma Bridge''.

Initiative to build the bridge over the mighty river was taken first in 1998-99 through pre-feasibility study. In her speech, the Prime Minister, however, said Japan did the feasibility study of the bridge when she requested the Japanese government during her visit to that country in 1997.

But the BNP government did not accept the feasibility study as they wanted to construct the bridge through Aricha -Paturia, not the Mawa-Janjira point. That study also recommended the bridge at the same point as earlier study referred.

The Padma Multipurpose Bridge project was first approved by the ECNEC in 2007, which was revised with the increase in the length to 6.15 kms from 5.8 kms. It was then proposed to build the bridge in two-tier options keeping road on top and rail below in 2011.

The PMB project reached the current stage after two more revisions till 2021, escalating the cost to Tk 301.93 billion.

The CMBE built the steel-truss composite bridge against its financial proposal of Tk 121.33 billion and Sinohydro Corporation Limited the river-training work at Tk 87.07 billion which is yet to complete.

Abdul Monem Ltd-Hygenic Corporation of Malaysia did the work on Mawa and Janjira approach roads along with service-area development.

However, the Padma Multipurpose Bridge has been ready when the project's panel of experts' chairman, Prof Jamilur Reza Chowdhury, and two other PoE members-- Alamgir Mojibul Hoque and Dr AMM Shafiullah-- left the world.

The Padma Bridge is now recognized for its huge volume of works making four new world records, three first time in bridge construction in the world and seven for the first in Bangladesh.

Westerners have put us into the danger: PM’s Energy Advisor

‘Bangladesh, China to work with patience to achieve development goals’