The government's revenue earnings from the Dhaka bourse hit a 10-year high to Tk 2.66 billion in the just concluded fiscal year.

Market operators said on the back of rising trading volume, the government earnings from the prime bourse rose accordingly, as earning is related to turnover.

However, the government's earnings from the Dhaka Stock Exchange (DSE) dipped more than 10 years low to Tk 1.04 billion in the past FY2019-20 due to sluggish market turnover coupled with trading suspension for more than two months due to Covid-19 outbreak. 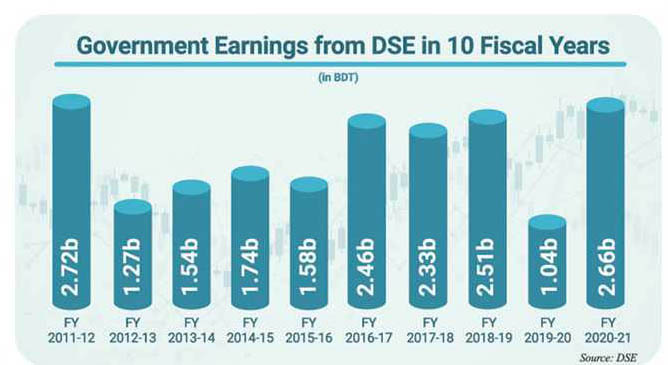 "This year the buoyant investors have given boost to the capital market amid growing confidence riding on regulatory reforms to bring disciple in the market," said a merchant banker.

And Tk 863 million came from the share sales by sponsor-directors and placement holders, the DSE data shows.

The DSE, on behalf of the government, collects the tax as TREC holders' commission at a rate of 0.05 per cent and from sponsor-directors' and placement holders' shares sales at a rate of 5.0 per cent. The bourse then deposits the amount to the public exchequer.

A DSE official said the government earnings from the prime bourse jumped as trading volume increased substantially during the period under review which helped higher revenue collection.

"The earnings are related to turnover. It's usual that tax will rise if turnover increased," he said.

He noted that as the turnover marked an increase in the just concluded fiscal year compared to the previous fiscal, so did the tax.

The daily turnover, the important gauge, jumped to more than Tk 10 billion on average in the FY2020-21, surging by 162 per cent over the previous fiscal's average of Tk 3.81 billion.

The daily turnover at the DSE recorded a decade high in few sessions during the FY2020-21 as investors put fresh funds on stocks amid increased confidence in the market.

The country's capital market also posted the highest return in a decade in the outgoing fiscal year despite ongoing pandemic.

With the inclusion of some big companies in the outgoing fiscal like largest IPO Robi Axiata, the market capitalisation of the prime bourse also soared to an all-time high at Tk 5,252 billion on July 15, 2021.

However, the DSE paid tax worth Tk 4.47 billion in the FY2010-11, the highest in its history, when the market witnessed a wild trend before crashing.

Bangladesh market sees highest number of IPOs in a decade

DSE-SME platform to be launched on September 30

Tax receipts from DSE up 82pc in July-August

Bangladesh market sees highest number of IPOs in a decade