Bangladesh is set to put forward a package of proposals, including the signing of Preferential Trade Agreement (PTA), with Nepal during the upcoming foreign office consultation (FOC), officials say.

The Bangladesh side will also submit proposals to its Nepalese counterpart for reduction of tariffs, removal of non-tariff barriers and para-tariff measures and rationalization of sensitive lists under SAPTA/APTA, they added.

Other proposals to be placed before the meeting include finalisation of the model text of bilateral investment treaty (BIT), holding trilateral meeting on hydropower cooperation and air connectivity and amendment to air service agreement between Bangladesh and Nepal.

Besides, issues of water resources management, BBIN, BIN MVA and BBIN JWG, inclusion of Rohanpur-Singhabad as additional transit for Nepal, defence corporation, visa and consular, health care, fisheries and livestock, agriculture, cooperation and engagement in the sector of youth development and sports, education, information technology, disaster management, climate change and memorandum of understanding (MoU) on tourism corporation are likely to come up at the meeting for discussion, a source said.

An inter-ministerial meeting on the upcoming FOC was held virtually on March 21. The FOC between Bangladesh and Nepal is expected to take place at Pokhara in Nepal on April 12-13, he added.

The first foreign office consultation was held on 31 July 2012 in Dhaka while the 2nd FOC was held in October 2017 in Dhaka, according to the meeting minutes.

The negotiation process of finalizing the text of PTA to be signed between Bangladesh and Nepal had been going on for three years, a senior official said.

PTA between the two countries has not been finalised as Nepal is yet to share the offer and request lists with Bangladesh. The PTA text and Rules of Origin have almost been finalized. With regard to the product list, Nepal requested to keep the Bangladesh's request list limited to 20 products.

In response to its request, the Ministry of Commerce sent a revised request list of 20 products. The Nepalese side is yet to share the offer list.

There is a huge potential of export of diversified products to Nepal. Bilateral trade between Bangladesh and Nepal stood at around US$ 73.47 million in the fiscal year 2020-21.

Bangladesh imports yarn from around 22 countries. The import volume of yarn from Nepal is only about US$ 1-2 million against the total bilateral trade volume with Nepal which is US$ 80 million in the current fiscal year so far, according to meeting minutes.

This pending issue of import of yarn through Banglabandha from Nepal would appear as an indirect barrier to the trade relation between Bangladesh and Nepal, the minutes read. 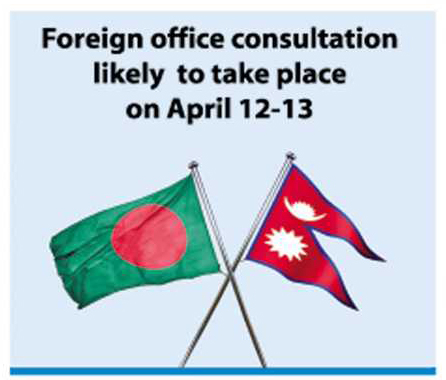 Both sides face many barriers to trade and commerce in each others' markets, an official said.

The meeting of SAFTA Council of Experts, where the reduction of tariffs, removal of non-tariff barriers and para-tariff measures, rationalization of sensitive lists are discussed generally, got postponed several times.

Bangladesh is always enthusiastic and positive to discuss the issues in the meeting of SAFTA Council of Experts and expects the same from other stakeholders.

The Nepalese side said that they were working on the draft of Bilateral Investment Treaty (BIT), which they would share with the Bangladesh side. Though the formulation of the draft model text of BIT has been completed, it is yet to be approved by the government of Nepal.

To fix the text, it was decided to be signed by three parties in the last BIN MVA meeting. However, the Nepalese side refused to sign it mentioning that it needs to be approved by the Nepalese Cabinet.

The FOC will review various global, regional and sub-regional issues of mutual interests. Issues of bilateral cooperation will also come up at the meeting for discussion.

Scenes of cheers as crowd gathers

Both bourses witness downturn at opening