CHATTOGRAM: Although 64 per cent work of Single Point Mooring (SPM) project in Maheshkhali have been completed till Friday, the mega project may not be implemented by June next year due to delays caused multiple times in the last one and a half years by various reasons, including coronavirus outbreak and consequent lockdown, sources said. 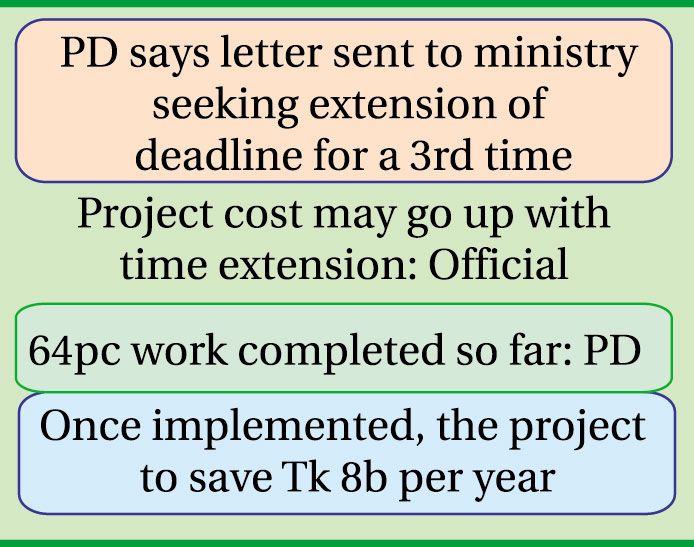 An official of the project said, the SMP implementation deadline, revised twice earlier, will need a further revision as prices of raw materials to construct the project have already shot up in international market in the last two years and the labour cost also gone up in the period.

SPM Project Director (PD) Md Sharif Hasnat told the Financial Express on Friday around 64 per cent of the total construction work (including installation of pipeline 70 per cent and construction of pump house 90 per cent) have been completed but it will take two more months than the new deadline of June 30, 2022, to complete the rest 34 per cent work.

The original cost of the project was $550.40 million or Tk 4,935.96 crore. But, along with the deadline, the project cost was also revised twice. Officials said, if the government approves revision for a third time, the total cost is likely to go up notably.

Mr Sharif Hasnat said the construction, which resumed last month, is going on in full swing now following lifting of the coronavirus-induced nationwide lockdown. "The speed of work was slow due to a shortage of local and foreign workers (earlier this year)," he noted.

However, he claimed that the work of project never stopped for a single day in the last one and a half months.

"Although the work was hindered amid the second wave of the pandemic earlier this year but now, we are continuing the work regularly. Despite the speed of work was slow due to the shortage of local and foreign workers (during the restriction), the work of project never stopped for a single day (in the period)."

Last month, an official had said the project would miss the newly-set up deadline of June 2022 and faced another further delay due to absence of Chinese workers who had got stuck in their own country following the outbreak.

The single-point mooring is a loading buoy anchored offshore, that serves as a mooring point and interconnect for tankers loading or offloading gas or liquid products.

The project, being built on Sonadia island in Maheshkhali, aims at offloading imported petroleum products at reduced cost and time.

Sources said, with installation of the SPM having double pipeline facility to supply imported fuel at Moheshkhali island, the government will save at least Tk 800 crore per year following implementation. The Bangladesh Petroleum Corporation (BPC) initiated the SPM project to carry fuel through pipelines from mother vessels quickly to save carrying costs.

The overall progress of the pipe line installation rose to 70% as of Friday. Work to set up pump station and tanks with the development of land is almost 90% completed so far, officials said. The crude oil and HSD stored at storage tanks in Maheshkhali will be pumped to BPC's Eastern Refinery Limited (ERL) through two separate pipelines (offshore and onshore).

He said, "There will be installations of SPM and 220-kilometre double pipeline, storage tanks and pump station in Moheshkhali. Besides, Supervisory Control and Data Acquisition (SCADA) centres and a fire fighting station will also be set up. All related works have been done."

Sources said, SPM will have an annual unloading capacity of 9 million tonnes. It is one of the top priority projects of the Energy Division as the project will substantially save the cost of fuel transportation. It will also ensure prompt direct unloading from the deep sea vessels.

Taken up in 2012, the government awarded the contract of the project to Chinese company China Petroleum Pipeline Bureau (CPP) after completing official process. BPC signed an agreement with the CPP on December 7, 2016, to implement it at a cost of $550.40 million.

Once implemented, the SPM will be able to unload 120,000 metric tonnes (MT) of crude oil in 48 hours and 70,000 MT diesel in 28 hours. The project will comprise three crude oil tanks (each of net capacity 50,000 m³), three HSD tanks (each of net capacity of 30,000 m³), main pumps, booster pumps and other pumps, installation of generator for power supply, housing facilities, administration and other buildings, pigging system, custody metering facility, security system and fire fighting system.

Some major vegetables get pricier in Dhaka’s kitchen markets

Bangladesh to be bridge between east, west for business, PM tells investment summit

e-commerce clients may get back Tk 2.14b