Licences of five merchant banks to be cancelled soon: BSEC

During the period, a total of 115 companies went public raising capital through IPOs and 32 IPOs of those were solely managed by only three merchant banks.

The remaining 43 merchant banks managed 83 IPOs during 2012-2022 and 20 merchant bankers had no role in bringing any IPO.

Talking to the FE, a top official of the Bangladesh Securities and Exchange Commission (BSEC) said they have become tougher against the merchant banks having no role in bringing any IPO.

"The BSEC has already cancelled the licence of merchant banks which failed to bring a single IPO. The licences of some other five merchant banks are set to be cancelled soon over their failure to bring any IPO," said the BSEC official seeking anonymity.

A merchant bank is a financial institution that manages portfolios and conducts underwriting, loan services, financial advising, and fundraising services for large corporations and high-net-worth individuals.

The three merchant banks which managed the highest number of IPOs are ICB Capital Management, LankaBangla Investments and IDLC Investments.

LankaBangla Investments managed 11 IPOs solely while it managed another one IPO jointly with another merchant bank during the period.

IDLC Investments managed eight IPOs solely and it managed no IPO jointly for the same period.

Dr. Shaikh Shamsuddin Ahmed, a BSEC commissioner, said the securities regulator does not feel comfortable to speak about the role of merchant banks in bringing quality IPOs.

"The role of merchant banks is yet to be sufficient in convincing good companies to offload shares," Mr. Ahmed said.

He said it's not the role of the securities regulator to convince or inspire a company to go public.

"Nevertheless, the securities regulator is working unofficially to inspire good companies to go public. We are pushing the bourses and merchant banks to accelerate communications with the companies having good prospects," said the BSEC commissioner Mr. Ahmed.

He said it is the responsibilities of the bourses in accelerating communication with prospective companies.

"There is a provision of being listed within three years of getting licence of bank. But we do not know why five banks have not yet come forward to float IPOs," said the BSEC commissioner.

He said the securities regulator recently wrote to the central bank to know the reasons behind the delay of those five banks' listing.

Asked about the que of IPOs, the BSEC commissioner said they have cleared backlogs of IPos submitted previously.

"In that sense, there is nothing regarding pipeline and now it does not take enough time to clear an IPO proposal," Mr. Ahmed said.

Mohammad Rezaul Karim, a BSEC executive director and spokesperson, said presently there are five IPOs submitted for the regulatory consideration.

Asked, the general secretary of Bangladesh Merchant Bankers Association (BMBA) Riyad Matin said many merchant banks have lack of capacity in managing IPOs along with conducting marketing for good companies. 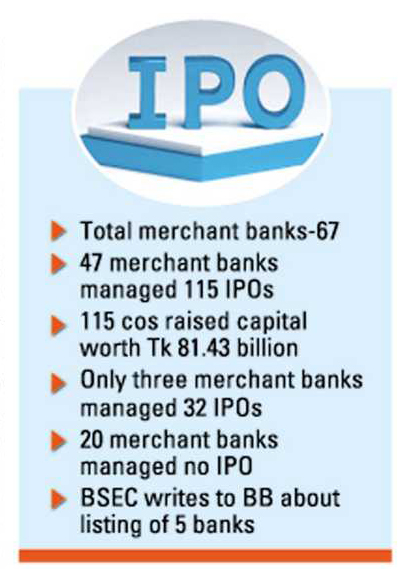 "The lack of good professionals is a reason behind managing insufficient number of IPOs. The fees charged for managing an IPO is also not enough in consideration of time that takes for preparing a company to go public," Mr. Matin said.

He said the problem is that many companies are not willing to go public during heydays of their operations.

"Many companies feel the necessity of going public only when they face crisis of capital. The securities regulator is trying to bring acceleration in the activities of merchant banks to increase quality IPOs," Mr. Matin said.

AFC Capital managed the highest number of IPOs jointly in last one decade. The company managed 12 IPOs jointly with other merchant banks during the period.

The IPO of the second largest mobile operators Robi Axiata was managed by IDLC Investments. The company raised a fund worth Tk 5.23 billion from investors and its employees and topped the fund worth Tk 4.86 billion raised by Grameenphone.

The IPO of Walton Hi-Tech Industries was managed by AAA Finance & Investment. The company also managed the IPO of Bashundhara Paper Mills.

Of other merchant banks, BRAC EPL managed the IPO of Unique Hotel & Resorts and Union Bank.

A company can be listed with the bourse under both the fixed price and book building method.

Of 115 companies, 12 were listed through book building method.

Adani hits back at Hindenburg, says it made all disclosures