Government agencies couldn't speed up development-budget implementation to anywhere near pre-covid levels, officials said Tuesday, and two of them moved at the slowest pace.

They said the Shipping Ministry joined the 'weak club' with the Health Services Division in project execution as both performed "worst" in the first five months of the current fiscal year (FY), 2021-22.

The ministry and the division both implemented only one-third of the average project-execution rate of all the ministries and agencies during the July-November period of this fiscal, the officials said.

Implementation Monitoring and Evaluation Division (IMED) data show that the ministries all together had spent 18.61 per cent of the Annual Development Programme (ADP) allocations during the five months.

The health services division spent only 6.43 per cent and the shipping ministry 8.04 per cent of their total development outlay, the IMED statistics show.

Meanwhile, the overall ADP implementation is still on the slow trajectory as the ministries and agencies snail some 1.5-percentage points behind the pre-covid marks so far.

"This is very unfortunate that although the entire economy restarted over the last few months of the current fiscal year, the health ministry could not pick up its performance pace. Now, the shipping ministry has joined the forum," says a senior IMED official.

He regrets that although the government is investing millions of dollars in training up its officials every year, the project-implementation performance has not been upgraded over the years.

According to the IMED, the ministries and agencies spent Tk440.61 billion or 18.61 per cent of the total Tk2.36-trillion ADP outlay during the July-November period. 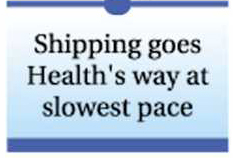 In the same period of FY2021, government ADP spending was lower due to the coronavirus impact. The spending was recorded 17.93 per cent of the Tk 2.14-trillion ADP.

Meanwhile, the Health Services Division again got positioned lowest in development-budget spending during the period under review as it spent only 6.43 per cent of its total allocations, 12.18-percentage points lower than the average spending rate, IMED data show.

True to its track record over the last one decade, the HSD has been on the same slow lane when the entire country saw massive health-service fallout during this COVID-19 pandemic, they said.

The shipping ministry had also performed worse in the same period this fiscal, spending only 8.04 per cent.

The 13 other fellow larger development budget-holding ministries and divisions spent 19 per cent on average of their respective allocations, an FE analysis finds.

A senior Planning Commission (PC) official says the health ministry got the highest-ever budget allocation under the ADP in FY2022 compared to the previous years since independence.

"But it failed to duly implement the development projects, which got government's highest priority."

The ministry had been showing almost the same weakness in its project implementation over the years, the PC official says.

Development analysts and officials say the health ministry's below-par capacity, different alleged scams and corruption under its domain, and lack of transparency put Bangladesh in a vulnerable condition during this coronavirus pandemic.

They urge the government to restructure the country's health administration for enhancing its project-implementation capacity and providing better service to people.

Meanwhile, the Industries Ministry had performed best in the July-November period this FY2022 as it utilized Tk 18.55 billion, 45.40 per cent of its Tk 40.87 billion total outlay in the current fiscal's ADP.

Housing and Public Works Ministry attained second position in Jul-Nov period executing 26.42 per cent of the ADP, followed by water resources ministry with its 23.92 per cent, the local government division 22.78 per cent, and the road transport and bridges ministry 22.26 per cent.

Japanese Economic Zone to go into production next year

Foreign aid pledged for Bangladesh in first half plunges 83pc

The mental toll of Covid curbs

Love for the feathery friends