Speakers at a discussion on Saturday emphasised on taking a multidimensional poverty measurement approach instead of income-based poverty measures to assess the real poverty line of Bangladesh.

Although the poverty rate declined to nearly 21 per cent in the last 20 years from 40 per cent in the 1990s, the number of poor people (around 35 million) is still higher than it was three decades ago.

Economists, academics and researchers were speaking at the event on launching "Bangladesh Poverty Watch Report 2022" in the city, presided over by Palli Karma-Sahayak Foundation (PKSF) Chairman Dr Qazi Kholiquzzaman Ahmad.

The report was jointly prepared by the Institute for Inclusive Finance and Development (InM) and the Center for Inclusive Development Dialogue (CIDD), aimed at ensuring that grassroots voices of 'left behind' and extremely poor population groups are heard.

The report has found multidimensional poverty in Bangladesh.

It pointed out five key factors - discrimination, geography, shocks and fragility, socio-economic status and governance - behind deprivation in Bangladesh. 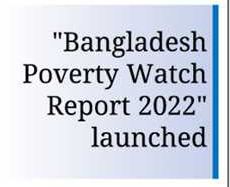 It also showed that the plain land ethnic groups and transgender people are very much deprived of different  social and government facilities, leaving them below the poverty line.

Dr Ahmad said that although the rate of poverty declined remarkably in the last three decades, some 35 million people are still poor like 30 years ago.

"Actually, the income-based poverty measurement will not eliminate the actual poverty from the country. We've to find out about multidimensional poverty," he added.

Former Bangladesh Bank Governor Dr Atiur Rahman said that although Bangladesh has achieved remarkable success in poverty reduction, absolute poverty has to be eliminated through finding out the reasons beyond the daily income level.

Professor Muzammel Huq of a Scottish university said the Rangpur division is still possessing a higher rate of poverty and it is not declining.

"It's a bad news for the country. The researchers and the government have to find out the reasons and take quick actions for ensuring inclusive development," he added.

He also suggested expanding the social safety net programme which is still very negligible compared to the developed world like England.

The report suggests several priority actions for speeding up the catching up process in society.

The key will be to craft these policies/actions within the broader inclusive development strategies of the government that cover cross-cutting and national level issues, such as strengthening inclusive growth, ensuring financial inclusion, reducing income and social inequality, accessing quality education, health, nutrition and other basic services, adopting appropriate macroeconomic policy, addressing pockets of lagging social groups/regions, and adopting initiatives at the local level along with effectively managing micro-macro transmissions.

Further, regular monitoring of progress is important to assess the degree of convergence between the left behind and the relatively advanced population groups and the lagging and the well-off regions of Bangladesh.

Finally, these left-behind communities have issues that are directly or indirectly related to the daily work of the local governments and local institutions.

For implementing the agenda, one important element will be to utilise the potential of local action to drive development and create appropriate legal and financial frameworks to support all local partners in playing their part in the achievement of the integrated and universal inclusion agenda.

The key is to empower all local stakeholders, especially the local government institutions, aimed at making sustainable and inclusive development more responsive, and therefore, relevant to local needs and aspirations.

The goals will be reached only if local actors including these left-behind communities fully participate, not only in the implementation, but also in the agenda-setting and monitoring processes.

Participation requires that all relevant actors are involved in the decision-making process, through consultative and participative mechanisms, at the local and national levels within the overall inclusion framework.

Bangladesh reserves to fall to $30bn in FY23 before bouncing back: IMF