There was a remarkable statesman in Bangabandhu Sheikh Mujibur Rahman. An early instance of it came in January 1972 as he addressed the world's media in London only hours after his arrival from incarceration in Pakistan. He bore no ill will toward Pakistan, he said, and he wished President Bhutto well. It was a sentiment he would restate in Dhaka a couple of days later, when he told a rapturous crowd that he was happy with his Bangladesh and he expected Pakistan's new leader to be content with what remained of his country. For a political leader who had been in solitary confinement in an undisclosed location in Pakistan for nine months even as his people were being put to the sword and the gun in an unprecedented genocide, it was remarkable restraint on his part. Nowhere was there in him any sign or thoughts of retribution. It was proof once again of the qualities that had raised him to the heights of leadership over the years. 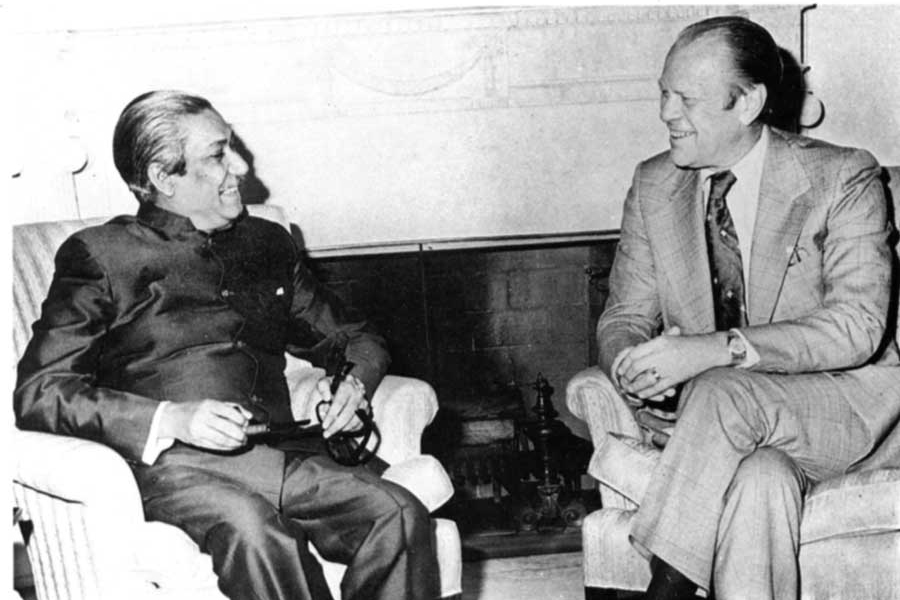 Bangabandhu with US President Gerald Ford in 1974 — MoFA Archive

Bangabandhu's statesmanship was quite removed from the pretences and hypocrisy which generally characterized diplomacy in the modern world. He was polite in dealing with the leaders of other nations and yet he remained keenly aware of what he needed to tell them about his people and their travails. In Delhi, on his way back home to Bangladesh, he rather surprised Indian Prime Minister Indira Gandhi by asking her when she would withdraw her soldiers from Bangladesh. By 17 March, Bangabandhu's birthday, India began taking its soldiers back home.

There may have been little subtlety in Bangabandhu's approach, but there was no mistaking his awareness of the national interest. And the national interest was clearly a prime factor in his decision to let go of the 195 Pakistani military officers accused of war crimes in Bangladesh in 1971. There were many who excoriated him over his move, but he saw it from a particular point of view: that the Bengalis stranded in Pakistan would plunge into grave problems if the Pakistani soldiers were not freed. Besides, there was a core philosophy at work in his approach to foreign policy. He had made it clear that for Bangladesh, foreign policy would be based on friendship with all and malice toward none.

Pragmatism was a huge motivational factor in Bangabandhu's attitude to the United States and China. Both these countries, insofar as their governments were concerned, had overtly opposed Bangladesh's war of liberation and had publicly upheld Pakistan's cause in 1971. The Chinese made their pro-Pakistan attitude clearer when, after December 1971, they twice vetoed Bangladesh's attempts to enter the United Nations. And yet Sheikh Mujibur Rahman exercised restraint, saying not a word against Washington and Beijing. He knew he would need to deal with them in future. It was a classic case of a national leader forgiving the sins of people he needed to turn into friends. Bangabandhu travelled to New York and then to Washington, where he apprised President Gerald Ford in unambiguous manner of the difficulties his country was up against. He spoke to Henry Kissinger, who would later visit Dhaka, despite knowing that Kissinger's had been a strident voice in the Nixon administration's tilt toward Pakistan in 1971.

In his rather short-lived administration of slightly over three years, Bangabandhu Sheikh Mujibur Rahman was instrumental in taking his new country into the important councils of global diplomacy. It was his sheer force of personality, his charisma, that earned Bangladesh's people respect and sympathy across the world. There clearly was the perception in him that while Bengalis inhabited a small state, they were privy to a culture that was as spacious as the long distances of time between generations, which was why they needed to make themselves heard among other nations. Bangabandhu personified this ambition in his people, through choosing to join the summit of Islamic nations in Lahore in February 1974 once Pakistan had acknowledged Bangladesh as an independent nation.

Bangabandhu was a larger than life individual. Edward Heath and Harold Wilson were happy in his company. Fidel Castro was mesmerized by him, by the fact that a nation had fought and won a war in his name even as he languished in prison. Muammar Gaddafi, Pakistan's friend, was awed by Bangladesh's leader. Marshal Tito respected him hugely and Anwar Sadat thought of him as a brother. The United Arab Emirates' Sheikh Zayed bin Sultan al Nahiyan was cheered at the discovery that he and Mujib were both sheikhs. Bangabandhu grinned and told him, "Yes, but there is a difference. You see, I am a very poor sheikh." Both men burst into laughter.

There was the quintessential diplomat in Bangabandhu; and it was in evidence as far back as the heady days of early 1972. Asked by a newsman if he contemplated West Bengal someday joining his free country to create a greater Bangladesh, he looked the newsman in the eye, let out a puff of smoke from his ubiquitous pipe and said gently, with that trademark smile playing on his lips, "I am happy with my Bangladesh."

Syed Badrul Ahsan is a senior