RAJSHAHI: The crisis of land for preparing Boro seedbeds has long been a common issue for the farmers of Rajshahi.

However, the farmers have recently come up with a way out by producing seedlings on the charlands (shoal) of the Padma river. 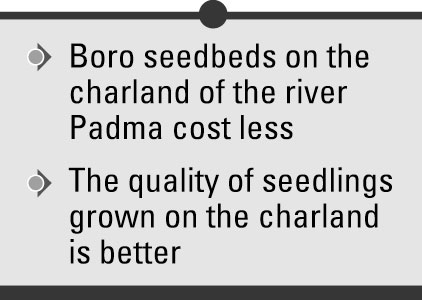 Since the advent of winter with the recession of river-water, some farmers have started producing paddy seedlings by using Char Majardiar of Rajshahi, Char Asariadaha, Diar Manik Char and Decreer Char of Godagari upazila as Boro seedbeds, according to the farmers.

Boro grower Abdul Quddus from Pirijpur village said, "Earlier, we required to cultivate land, irrigate water, and apply fertiliser to make seedbeds on cultivable land. But now, we no longer need them on the charlands."

So, producing seedlings on the charlands is highly cost-effective. The quality of saplings is better than those are grown on cultivable lands, he added.

Toufiqur Rahman, Additional Deputy Director, Department of Agriculture Extension, Rajshahi, said, "There is no shortage of lands to prepare Boro seedbeds. The seedbeds prepared on the charland need no water and fertiliser."

Padmachhara Lake can be a tourist hotspot

Bangla medium vs English medium: Is there a winner?

Registration for on-campus round of Hult Prize begins