Management fees of MFs to be fixed based on performance

The Bangladesh Securities and Exchange Commission (BSEC) is set to introduce a new provision of determining the management fees of mutual funds (MFs) very soon.

As per the latest provision, the management fees for managing MFs will be determined based on efficiency and performance of the fund managers or asset management companies.

The process for introduction of the new provision has almost been completed and it will be published through a gazette notification soon, BSEC Chairman Prof. Shibli Rubayat Ul Islam said while speaking at a roundtable on the capital market on Saturday. 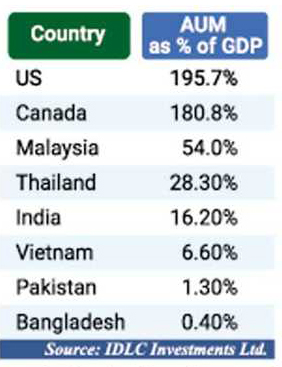 An MF is a financial vehicle that pools assets from shareholders to invest in securities like stocks, bonds, money market instruments, and other assets. It is managed by professional fund managers and its portfolio is structured and maintained to match the investment objectives stated in its prospectus.

The regulatory move to fix management fees based on the performance of the fund managers came in the backdrop of a long-standing demand for introduction of time-befitting regulations for the MFs.

The poor performance of the fund managers have been blamed for the lack of investor confidence in the MFs.

On the other hand, there are 54 AMCs in Bangladesh and the size of its AUM is $1.60 billion only.

In his speech, BSEC chairman Prof. Shibli Rubayat said the recent growth trend of the MFs is well and they have started disbursing dividends.

"We call the fund managers when they fail to distribute dividends. We ask them for the reasons behind distributing fewer dividends. We also want to know whether the management is weak or not," he told the roundtable held in a city hotel.

He also said investors having no investment literacy should not invest in the MFs.

When asked by this reporter, Dr Mizanur Rahman, a BSEC commissioner, said an amendment to the regulations for the MFs will bring about a massive change.

"Apart from the management fees, many other changes will be included in the new provision," said Mr. Rahman, also the chief of the BSEC MF department.

Asked about insignificant amount of AUM in Bangladesh, he said the situation will improve gradually.

Managing Director of IDLC Investments Md Moniruzzaman said the MF is one of the most popular investment vehicles in developed countries due to investor confidence in such funds and fund managers.

"But Bangladesh is lagging way behind even its neighbour, India, in terms of the size of the MF industry relative to the economy," he said.

In the USA, the size of the industry is bigger than the economy itself, Moniruzzman said.

Earlier, the experts were critical of the regulatory decisions with regard to the extension of the tenures of the closed-end MFs and issuance of re-investment units (RIU).

They said the AMCs are benefitted only through RIU as their management fees are increased through the RIU.

The previous commission allowed the AMCs to extend the tenures of the closed-end MFs.

The then commission, however, said it took the decision in step with the suggestion of the government.

Presently, there are 36 closed-end MFs listed on the stock exchanges.

On the other hand, the number of open-end MFs is 84, according to the BSEC data.

Stocks edge up amid thin participation of investors

Stocks edge up after choppy trading

Stocks marginally up at opening