Monetary transactions by using cards in Bangladesh's digitizing banking system are rebounding impressively after a massive fall throughout the year in 2020 under corona shocks, sources say.

Economic recovery following the reopening from the pandemic-enforced curbs worldwide, online business boom, and the lifting of travel and trade restrictions are providing the push to payments with the 'plastic money', analysts said Saturday.

On the foreign-currency part of the digital finance, long-struggling transactions have hopped up by 125.25 per cent within a year after the opening up of overseas travel by different countries, an FE analysis has found.

The transaction in local currency has also regained momentum, maintaining a higher trend in the recent months, as the country's economic recovery sustains after prolonged Covid-19 disruption, the analysis has found. 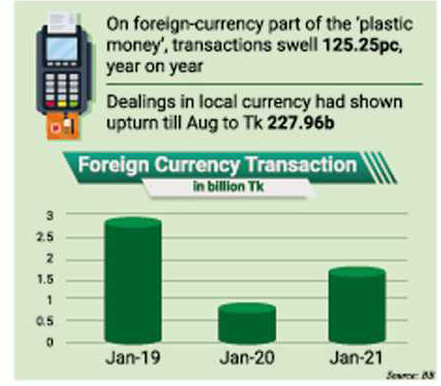 Bangladesh Bank (BB) statistics show that the customers with debit and credit cards transacted in Tk 1.62 billion worth of foreign currency in August this year compared to Tk720 million in the corresponding period in 2020.

Two years ago in August 2019, the foreign-currency transactions by cards were worth Tk 2.87 billion, the BB said.

Similarly, the dealings in local currency had shown a higher trend in August last to Tk 227.96 billion from Tk 148.88 billion in the same period last year.

Two years ago before the impact of Covid-19, in August 2019, the local- currency transactions amounted to Tk 161.59 billion, the BB data showed.

Analysts say the money transactions through cards hopped up as the government opened up economy and coronavirus situation at home and abroad improved a lot in recent months.

Besides, improved knowledge of digital banking system has also uplifted the transaction through the plastic money.

"Huge development in Bangladesh's e-commerce business also boosted the plastic-money transaction in the banking system", economists and bankers say with one voice.

Plastic money is a term coined keeping in view the increasing number of transactions taking place on part of consumers for paying for transactions incurred by them to purchase goods and services physically and virtually. Plastic money takes the forms of credit card, debit card, pre-paid balance card, smart cards etc.

People in the country usually use the debit and credit cards for purchasing goods and services from home and abroad, as technology, particularly fintech, is making things so easy every passing day.

Chief Financial Officer (CFO) at Mercantile Bank Limited Tapash Chandra Paul told the FE that, after the open-up of the economy, people's movement increased, resulting in higher money transaction through the banking cards.

He said, "The Covid-19 pandemic had prohibited people from flying outside the country which dropped the foreign- currency transactions significantly through the cards. Now it has regained. It is good news for our economy."

Besides, the banking system in Bangladesh has invested a lot for digitisation of their services over the years due mainly to the customers' pressure on getting the internet banking services, he added.Mr Paul said although there is an impact on the plastic-money transaction in recent days from the e-commerce scams, but it would grow further with enhancement of security and government regulations.

Former Bangladesh Bank Governor Dr Salehuddin Ahmed hails it as a good news for the country that the plastic money transaction has swelled, but finds the need for some dos.

"At the same time, we have to think about the simplification of the online- transaction system for the customers."

He finds a demerit of the system as of now. "The current online transaction is mostly favouring the bankers instead of the customers. If any person goes to the online- banking system, its system is still very complex. We have to think of our IT knowledge. The online platform should be made considering the poor IT knowledge of the people," Dr Ahmed said.

The government should have a set of better rules and regulations for e-commerce and relevant service sectors which would enhance the plastic-money transaction, Dr Ahmed, also an economist, told the FE.

‘Walton is a sophisticated, state-of-the-art industry’

BGMEA teams up with CNN to promote 'Made in Bangladesh'

More than 30 Saudi Arabian companies want to invest in Bangladesh

BRAC to collaborate with BGMEA in tech solutions