Fourteen lame-duck projects, which have been receiving government funds with "no execution progress" made for years, are destined to be dropped from the current ADP, Planning Ministry officials said.

The ministry has taken a tough stance on those schemes, they said Saturday, adding that the ministry is likely to scrap those projects from the Tk 2.25-trillion Annual Development Programme (ADP) for the current Fiscal year (FY) 2021-22. 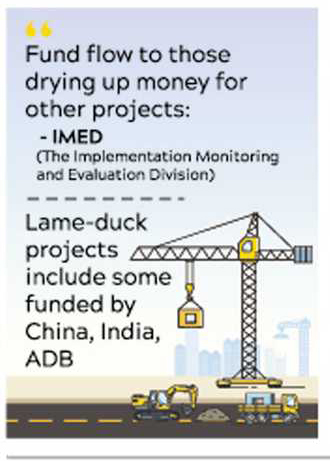 The Implementation Monitoring and Evaluation Division (IMED) has asked the relevant project-executing agencies and line ministries for sending details on the progress, difficulties and their remedies, and the particulars of project directors.

"We have already sought information from the agencies and ministries about their zero-progress projects. We have to review those for the next decision," IMED Secretary Pradip Ranjan Chakraborty told the FE.

He said that zero-progress projects have not only affected the expected outcome but also blocked the public money, resulting in lower fund flow into some other schemes.

Bangladesh Railway (BR) under the ministry of railways has so far failed to implement the China-supported project on "Upgradation of Akhaura-Sylhet section into dual-gauge from the metre-gauge line".

About two and a half years ago, in April 2019, the BR took up the project worth Tk 215.54 billion with financial support from China, which has so far had no physical progress, officials said.

Similarly, the state-owned Railway has so far failed to start a Tk 36.02 billion "BR's Rolling Stock Operation" project although it was taken up in July 2017.

Insiders said the ADB had already expressed its concern and dissatisfaction over the BR project being stalled.

The Power Division also could not make a start of work on the "Integrated capacity improvement in Bangladesh's power transmission system" project in more than two years now.

The government approved the project for implementation between July 2019 and June 2023.

The "Modernisation of city street light system in different areas under Chittagong City Corporation (CCC)" project under the Local Government Division proved a nonstarter as its timeline was over this past June without modernising a single light.

The CCC has failed to implement the Indian government-supported Tk 2.61 billion project even during its two-and-a-half-year tenure.

On its part, the internal resources division under the ministry of finance has also faltered on the implementation of the "Construction of Khulna tax building" project. Its tenure is from July 2019 to June 2022.

The IMED has identified Water Resources Ministry's "Rehabilitation of Charbagadi pump-house and Hajimara regulator under the Chandpur irrigation" project as an absolutely "zero-progress" one.

The monitoring division has recommended scrapping the Water Ministry's Tk 1.17 billion project for its "massive crumbling" in execution, insiders said.

"Violation of procurement law and irregularities also has deterred the project execution as the government high-ups concerned defied approval for its procurement proposals," said one of them.

The Information Ministry could not make a move to start execution of the "Setting up of 6 full-fledged TV stations" project although its tenure is nearing its end-December this year.

The government approved the project involving a cost of Tk 13.91 billion for completion between January 2017 and December 2021.

Both the projects were taken up in 2017 and scheduled to be completed in December 2022.

The Women and Children Affairs Ministry has had "nil progress" in its "Setting up of Community Nursing College at Dhaka for the women" project.

The project was scheduled to be implemented between July 2017 and June 2022.

"We have already recommended closure for some of those projects. And we will scrutinise their reasons of failure, obstructions and their removal measures by both the agencies and line ministries and also the profiles of the PDs," said a senior Planning Commission official about the process of action.

Those project authorities have been receiving fund allocations every year but failed to implement those, which is "very surprising", he added.

"The public funds have been stuck up in those projects. However, many others are struggling for implementation delays for fund shortages," the IMED official said.

Robi to sell off its remaining network towers

Central rawhide storage to be built in Savar

Karnaphuli capital dredging to end by next July