Stymied growth in the wage rate index (WRI) compared to higher inflation rate affects the low-income groups of people severely in their daily living, they add.

Economists say if the lower WRI continued against the higher inflationary pressure, many people will slip down the poverty line and there will be severe impact on employment, thereby on production and consumption.

Bangladesh Bureau of Statistics (BBS) data show the country's WRI at 6.56 per cent in the last month of July. Conversely, the inflation rate in the first month of the current fiscal year (July) was recorded at 7.48 per cent. 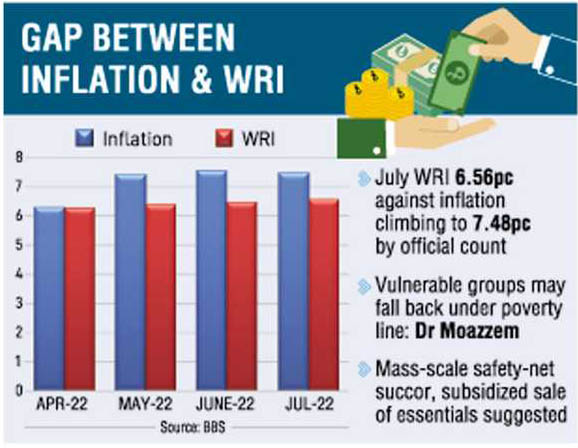 Over the last few months, the gap between the WRI and point-to-point inflation has been gaping wide, thereby eating into the real wage rates of labourers.

The inflation suddenly jumped onto '7.0-percent trajectory' three months ago in May, which widened further the gap with the WRI.

The BBS data show that the WRI in May this year was 6.38 per cent while the point-to-point inflation swelled to 7.42 per cent, and in June, the wage index increased to 6.47 per cent while inflation far outstripped it to stand at 7.56 per cent.

Before May this year, the gap between WRI and the inflation rates was very thin.

Bangladesh's nearly 87-percent people work in informal sectors where most of them are daily wage earners.

WRI is an important indicator for measuring the trend and changes in the aggregate wages of the wage earners. It is intended to measure the movement of nominal wages of low-paid skilled and unskilled labour over time in different sectors of the economy. It is also used to measure changes in real wages relative to prices of goods they buy.

Currently, the inflationary pressure has crippled people massively as the prices of all the products are rising by the day in retail markets, the analysts said Friday.

Centre for Policy Dialogue (CPD) Research Director Dr KG Moazzem says the high inflation is weighing down the real wages of the labourers in the country.

"It's bad news for a nation. If the WRI continued to maintain a lower growth against the higher growth in inflation, vulnerable group will fall under the poverty line. It will boost the country's total poverty rate," he notes.

Dr Moazzem says: "If the real wage earning declines, then the people will go for spending their small deposits and some of them will go for borrowing to maintain their daily livelihood. Once they will also lose their borrowing capacity, which will push them behind the poverty line."

The fixed-wage earners like the readymade garment workers, daily-basis workers in different government and private companies and agencies, farmers, and construction works may lose their job, the CPD researcher fears.

In the case of higher wage rate, the employer will try to cut his company expenditure through slashing the manpower, which will ultimately affect employment in the country, Dr Moazzem says about a latent paradox.

He suggests that the government intensify the social safety-net programmes, OMS sale, widespread subsidized sale of different essentials to help out those vulnerable groups and the poor wage earners, he said.

Economists' suggestions come at a time when low-paid tea-garden workers have been on a prolonged strike for subsistence wages and others expressing their grievances through demonstrations.